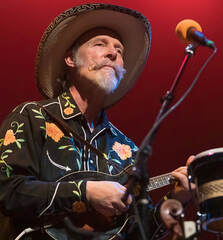 Joe Craven
Joe Craven wears a lot of hats. He is an award-winning instrumentalist, a vocalist, music producer, creativity educator, actor, storyteller, visual artist, carnival barker, noisemaker, fashion “insultant” and former museologist. For over 35 years, Joe has made a living playing forward folk tradition and process by mashing up ideas and sound tools from a variety of unexpected places, creating new music altogether. Joe has made music with Jerry Garcia, David Lindley, David Grisman, Alison Brown, Howard Levy, Vassar Clements, Rob Ickes and many other innovative artists. He is a featured artist/educator in the PBS television series, Music Gone Public, and Joe has created music and sound effects for commercials, soundtracks, computer games and contributions to several Grammy-nominated projects. From Carnegie Hall to street-corner busking, around the world and back – Joe’s at home and loving every minute. As an award-winning educator, Joe has taught with jazz vocalist Inga Swearengen, bassist Victor Wooten, children’s music innovator Paul Reisler and jazz percussionist Jason Marsalis. He’s the Executive Director of Vocáli Voice Camp, WinterTunes and RiverTunes Roots Music Camps in California. He’s a recipient of a Folk Alliance Far-West Performer of the Year Award and the Swannanoa Gathering’s Master Music Maker Award in North Carolina where Joe has taught for over a decade during Fiddle Week and, more recently, Contemporary Folk Week. Joe emcees music festivals; the list includes Delfest, Telluride, High Sierra, Wintergrass, Live Oak, Hangtown and others. He is also a poet and eulogist. He sleeps occasionally. 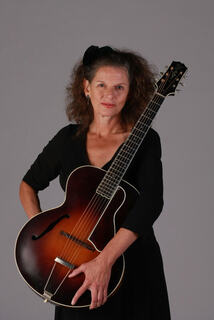 Cyd Smith
Guitarist/vocalist/songwriter Cyd Smith is a bit of a musical chameleon. She began studying classical guitar in her early teens and majored in music at Stanford University. While living in the Bay Area, she was introduced to the rich treasury of American folk music, especially bluegrass and vintage country music. From there it was a smooth transition into '20s, '30s, and '40s swing music, and she has delved deeply since into the guitarists, vocalists, and songwriters of that era. All these influences feed into her own genre-blending/bending songwriting. Over the years she has performed with many luminaries of the national acoustic music scene, including Mary Flower, Laurie Lewis,  Russ Barenberg, and Rebecca Kilgore. She has been a cornerstone of many Northwest bands in a wide range of styles from Swing to Americana to Classic Rock. As a songwriter, Cyd is an explorer of the unexpected – lyrically, harmonically, and melodically. Northwest music critic Paul de Baros writes, “A sort of Sheila Jordan of the folk/jazz beat, Cyd weds her flutey voice and alluring turns of phrase to a run of crisp rhythms, all propelled by indomitable guitar and lyrics that look sideways at life with a sharp, smart edge." A passion for swing and zeal for passing on the swing torch has made Cyd a favorite teacher at music camps throughout the US. The long list of camps where she has taught includes Puget Sound Guitar Workshop, California Coast Music Camp, SummerSongs West, Acoustic Alaska Guitar Camp, and Augusta Blues & Swing Week. 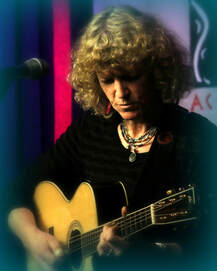 Cosy Sheridan
Cosy Sheridan has been called “one of the era’s finest and most thoughtful songwriters.” She first appeared on the national folk scene in 1992 when she won the songwriting contests at The Kerrville Folk Festival and The Telluride Bluegrass Festival. She has been on the road ever since. “You can't make it into double digits, and continue touring for twenty or so years, unless you know what you're doing, and do it well,” wrote The Chicago Examiner. Her CD My Fence & My Neighbor was in the Top 10 of 2018 on folk radio. Her release Pretty Bird was listed among Sing Out Magazine’s Great CDs of 2014. She plays a percussive bluesy guitar style backed by the strong rhythms and harmonies of her bass player Charlie Koch. She was a voice student at Berklee College of Music, and a guitar student of legendary finger style players Eric Schoenberg and Guy Van Duser. She has performed at Carnegie Hall, The Cowgirl Hall of Fame and on the Jerry Lewis Telethon. Cosy teaches classes in songwriting, performance and guitar at workshops and adult music camps across the country. She is the director of Moab Folk Camp. 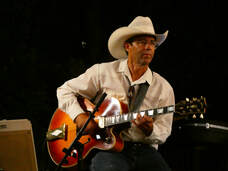 Dave Steward
David Steward is a guitar picking singer-songwriter who has been hiding out in the canyonlands of southeast Utah for more than 30 years. He loves to play many different styles of music. He has been a singing cowboy for many years, both as a solo performer and with the Bar-M Wranglers. Yes, he can yodel! He currently is playing with high energy alt-bluegrass band Quicksand Soup along with fellow camp instructor Eric Jones. He regularly performs in a jazz setting with legendary bassist Gene Perla. He enjoys mixing it up with other groups whether it is fronting a rock band, playing classic country or accompanying fiddler Sue Sternberg at a contra dance. 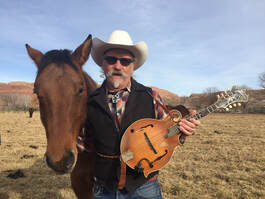 Eric Jones
Eric Jones is a student of early Americana music. His sound reflects a fondness for dressing-up traditional songs in new musical styles. He was a founding member of the Irish-American band Keltika, and the western slope string band Big Timbre. In addition to his solo work, he can be heard playing mandolin with the alt-bluegrass band Quicksand Soup and the folk-rock Rogue Assets. Eric has been hosting jams and teaching mandolin at the Moab Folk Camp since its first year. 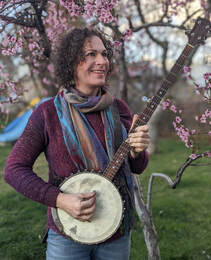 Mandy Danzig
Mandy plays almost anything with strings, and during her shows, she flows effortlessly from one instrument to another, weaving in and out of songs with her effervescent storytelling. Shows are rollicking romps through traditional and original music filled with joy, and an invitation for everyone to join the choir and sing along. As a teacher she is dedicated to the idea that the act of making music belongs in everyone’s life regardless of skill. Classes are a joyous supportive between student and teacher in pursuit of that goal. Love, light, and laughter are at the heart of Mandy Lynn’s music. Her years working as a licensed therapist and activist have left her with a deep dedication to social justice, leading her to write lyrics and melodies that one critic described as “songs that appeal to the heart and mind as well as the ear” (Greg Harness, Rootsworld Magazine). Mandy (She/Her/Hers) used to perform and teach under a different name and pronouns but she changed her name when she came out as transgender in December of 2019. A member of the duo Otter Creek, her song “The Fiddle Preacher” reached the top 10 on the Folk DJ charts. She has performed with the Salt Lake Choral Artists, the Southern Nevada Musical Arts Society, and the Utopia Early Music Ensemble in state premiers and programs that blend both classical and folk traditions. In collaboration with Wendy Lowder, her arrangement and performance was on TLC's “Sister Wives.” She is on Facebook, Instagram, and Twitter as MandyLynnDanzig and can be found online at www.MandyLynnDanzig.com. 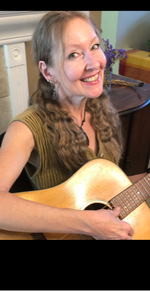 Anke Summerhill
Anke has been with the Moab Folk Camp since its beginnings and is an invaluable member of our staff. In recent years, she has worked with people of all ages in her community and beyond and is continually inspired by the healing power of music. She especially enjoys exploring songwriting & the creativity of playing the guitar with others as a way to weave community. Originally from Munich, Germany, Vancouver, British Columbia; and now surrounded by Utah's desert beauty, Anke’s diverse background and powerful gift of observation has seasoned her songwriting and performances with qualities which show genuine compassion. In addition to recording her own well received full-length CD projects, The Roots Run Deep & Shine On Through, her songs have found their way onto many CD compilations and samplers used in a wide variety of community fund raising projects. She recently recorded Utah Phillips' song: "Miner’s Lullaby", for the 2010 tribute project, “The Long Memory ~ Utah remembers Bruce 'Utah' Phillips” and loved singing harmonies on Hal Cannon's debut solo recording. 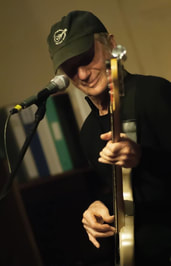 Charlie Koch
Charlie Koch has trained horses, sailed across the Atlantic more than once, and fronted an R&B band. He skippered a race boat for Buckminster Fuller. He whipped in for a fox hunt in Ireland and saddle broke young horses on a breeding farm in France. He taught tennis, skiing and horseback riding. He trained as a body-oriented psychotherapist. These days, he tours as the bass player for his wife, singer/songwriter Cosy Sheridan. In his first CD, Help Me To Believe, Charlie sings of his father – who was also a sailor – and of his longing for a place to call home. His love songs are heartfelt. His melodies are influenced by such diverse writers as Otis Redding, Ray Charles, and James Taylor. His guitar playing has roots in soulful country blues. 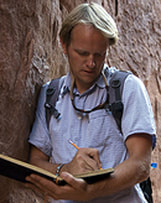 Chad Niehaus
Chad is an award-winning artist based in Moab, Utah. He creates acrylic paintings, pastel drawings, and linocut prints inspired by the open spaces of the Colorado Plateau.  His work has been featured in A Century of Sanctuary: The Art of Zion National Park,Painters of Utah's Canyons and Deserts, and on NPR's Radio West. Chad's work can be viewed at www.MoabArt.com.

Jon Fuller
Jon Fuller has been exploring and photographing the Moab area for almost 35 years and has been a Moab resident for the past twenty years. He is a working free-lance stock photographer and is a member of the North American Nature Photographers Association (NANPA). His first published photo was a two-page spread in National Geographic Magazine in January 1983. He has since been published in hundreds of publications world-wide, from the Singapore Times and Ranger Rick Magazine to Geomundo and the Insight Guide Books. He has traveled extensively internationally and has photographed in more than 40 countries, but his favorite subject is still the Colorado Plateau.