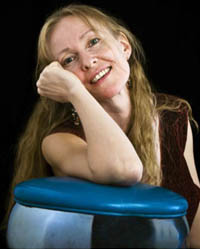 Anke has been with the Moab Folk Camp since its beginnings and is an invaluable member of our staff. In recent years, she has worked with people of all ages in her community and beyond and is continually inspired by the healing power of music. She especially enjoys exploring songwriting & the creativity of playing the guitar with others as a way to weave community.

Originally from Munich, Germany, Vancouver, British Columbia; and now surrounded by Utah's desert beauty, Anke’s diverse background and powerful gift of observation has seasoned her songwriting and performances with qualities which show genuine compassion. In addition to recording her own well received full-length CD projects, The Roots Run Deep & Shine On Through,  her songs have found their way onto many CD compilations and samplers used in a wide variety of community fund raising projects. She recently recorded Utah Phillips' song: "Miner’s Lullaby", for the 2010 tribute project, “The Long Memory ~ Utah remembers Bruce “Utah” Phillips” and loved singing harmonies on Hal Cannon's debut solo recording.